"The “Anthropology for Beginners” blog by Suman Nath is one of the most user/reader friendly sites relative to such an endeavor." - Global Oxford
"This blog contains lots of study materials on Anthropology and related topics" - University of Kassel
University of Houston includes Anthropology for beginners in their recommended reading list.
This is a humble endeavour to collect study materials on anthropology and then share it with interested others.
How to use:
1. One can see materials by clicking "Blog Archives" which is arranged chronologically.
2. Or can search in the search box provided by using key words.
I have not tried to be exhaustive, but its just elementary materials which will help newcomers to build up their materials better.
Because of the rising number of requests from people across the world, Anthropology for beginners has started a youtube channel. Those who are willing to have some explanations to the materials available in this blog can subscribe to this link: https://www.youtube.com/channel/UC_cq5vZOzI9aDstQEkru_MQ/videos
Watch the introductory video to get an overview of the youtube channel: https://www.youtube.com/watch?v=RY9DOnD0Uxo
You can write me about the posts. Feel free to write me at sumananthro1@gmail.com
Best, Suman 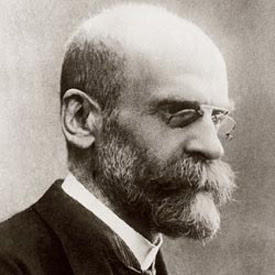 Émile Durkheim (1858–1916) was the founder of theoretically grounded empirical sociology in . He acknowledged the opacity of the social world and identified the ways in which an excessive reliance on experience tended to lead to a misrepresentation of its nature. He developed his own unique form of “scientific rationalism” in order to discover and clearly present its inherent properties, modes of existence, and forms of organization.

Durkheim was born in a small town in Alsace-Lorraine, in a family of modest means; his mother supplemented their family income with her embroidery shop. His father, grandfather, and great-grandfather were rabbis, but Émile decided while still a schoolboy that this was not to be his vocation. After attending his local school, he went to to study and at his third attempt, gained admittance to the École Normale Supérieure. While he found the style of education there too humanistic and literary, he gained immensely from working with the historian Fustel de Coulanges and with the neo-Kantian philosopher Émile Boutroux. At that time, and indeed subsequently, he was also strongly influenced by Charles Renouvier, another neo-Kantian philosopher. In 1885, he visited for a year, and then on his return, he taught philosophy for a short time in the Lycée de Troyes. In 1887, Durkheim was appointed to a post as chargé de cours of social science and pedagogy at the Faculty of Letters at , where he stayed for 15 years. In 1902, he returned to and was appointed as chargé de cours in the Science of Education at the Sorbonne. While he was made a Professor of Education in 1906, it was only in 1913 that he was given the title of Professor of Education and Sociology.

Suman Nath
A cotraveler who seats endlessly on a chair that we tend to call world and moves through wonder places. Try not to move from the chair, transcending time. Try to unearth silences and capture through multiple lenses. Behind the corner of my eyes there are things I can not see... things I do not understand... So here I am with words to share and become a cotraveler from my being. Yes, so many things to express but not genuinely gifted with skills.

My random thoughts
Photos I take