"The “Anthropology for Beginners” blog by Suman Nath is one of the most user/reader friendly sites relative to such an endeavor." - Global Oxford
"This blog contains lots of study materials on Anthropology and related topics" - University of Kassel
University of Houston includes Anthropology for beginners in their recommended reading list.
This is a humble endeavour to collect study materials on anthropology and then share it with interested others.
How to use:
1. One can see materials by clicking "Blog Archives" which is arranged chronologically.
2. Or can search in the search box provided by using key words.
I have not tried to be exhaustive, but its just elementary materials which will help newcomers to build up their materials better.
Because of the rising number of requests from people across the world, Anthropology for beginners has started a youtube channel. Those who are willing to have some explanations to the materials available in this blog can subscribe to this link: https://www.youtube.com/channel/UC_cq5vZOzI9aDstQEkru_MQ/videos
Watch the introductory video to get an overview of the youtube channel: https://www.youtube.com/watch?v=RY9DOnD0Uxo
You can write me about the posts. Feel free to write me at sumananthro1@gmail.com
Best, Suman

Archaeology is the study of human past through material remains. archaeologists study past humans and societies primarily through their material remains – the buildings, tools, and other artifacts that constitute what is known as the material culture left over from former societies. Archaeology, then, is both a physical activity out in the field, and an intellectual pursuit in the study or laboratory.

Nevertheless, one of the most challenging tasks for the archaeologist today is to know how to interpret material culture in human terms. How were those pots used? Why are some dwellings round and others square? Here the methods of archaeology and ethnography overlap. Archaeologists in recent decades have developed ethnoarchaeology, where like ethnographers they live among contemporary communities, but with the specific purpose of understanding how such societies use material culture – how they make their tools and weapons, why they build their settlements where they do, and so on. Moreover, archaeology has an active role to play in the field of conservation. Heritage studies constitute a developing field, where it is realized that the world’s cultural heritage is a diminishing resource, and one which holds different meanings for different people. The presentation of the findings of archaeology to the public cannot avoid difficult political issues, and the museum curator and the popularizer today have responsibilities which some can be seen to have failed.

Some of the major areas of application of archaeological knowledge are as follows: 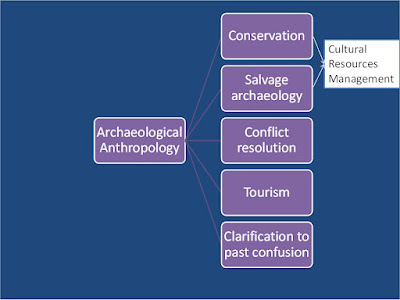 The economic growth in 1960s in Turley led to the construction of roads and buildings, which threatened and destroyed many archaeological sites and led to a new emphasison managing the cultural heritage (Cultural Resource Management, or CRM), either by preservation, or by recording and excavation prior to destruction.

Cultural resource management (CRM) is the theory and practice of managing, preserving, and interpreting cultural resources within a social and legal context. ‘Cultural resources’ refers to a wide variety of material and nonmaterial expressions of human social groups and cultures in the environment. The category includes archaeological remains, buildings and structures, landscapes and places, towns and neighborhoods, objects, historical documents, folk traditions, and other things associated with and valued by people.

Here the role the role of the archaeologist is to locate and record sites before they are destroyed by new roads, buildings, or dams, or by peatcutting and drainage in wetlands. In the USA a large number of sites are located and recorded in inventories every year under Cultural Resource Management (CRM) laws which were considerably broadened and strengthened in the 1970s. Proper liaison with the developer should allow archaeological survey to take place in advance along the projected line of road or in the path of development. Important sites thus discovered may require excavation, and in some cases can even cause construction plans to be altered. Certain archaeological remainsunearthed during the digging of subways in Rome and Mexico City were incorporated into the station architecture. In Britain, as in the USA, most excavations and surveys

are undertaken in the context of cultural resource management – the influence of the British “National Planning Policy Framework” has meant that expenditure on archaeology by developers has grown to c. £10 million ($15.4 million) annually.

Most of the civilised nations now have numerous legislations regarding the preservation of national heritage and archaeologists are employed to assess apriori on a) whether the place where construction activities will be undertaken has certain archaeological values or not, b) if it has then assessment of the nature of the site, c) if needed the entire site can be preserved, or recorded and then allowed the construction activities. Where as in countries like North America it is important for construction workers to seek permission of the archaeologists, as just been mentioned, in India the Archaeological Survey of India has the authority to declare a place as heritage and acquire it for preservation. Different state archaeology departments also actively engage themselves in declaring certain archaeologically important artefact as heritage.

In order to understand the CRM and the need for it, we also need a clearer perception of the term cultural heritage. Cultural Heritage (‘‘national heritage’’ or ‘‘heritage’’) refers to the legacy of physical artifacts and intangible attributes of a group or society that are inherited from past generations, maintained in the present and bestowed for the benefit of future generations.

Heritages are of two kinds, the physical object ranging from tiny beads to pyramids and non-objects like knowledge, custom, oral traditions, performing arts, social practices, rituals, festive events, knowledge and practices concerning nature and the universe or the knowledge and skills to produce traditional crafts.

Also known as Cultural property, the tangible cultural heritage includes the physical, or "tangible" cultural products. These include anything, from tiny artefact to large monuments or artworks. They are either movable or immovable heritage. Immovable heritage includes building so (which themselves may include installed art such as organs, stained glass windows, and frescos), large industrial installations, residential projects or other historic places and monuments. Moveable heritage includes books, documents, moveable artworks, machines, clothing, and other artifacts, that are considered worthy of preservation for the future. These include objects significant to the archaeology, architecture, science or technology of a specified culture. Click here for more details

Aspects and disciplines of the preservation and conservation of tangible culture include:

"Intangible cultural heritage" consists of non-physical aspects of a particular culture, more often maintained by social customs during a specific period in history. The concept includes the ways and means of behavior in a society, and the often formal rules for operating in a particular cultural climate. These include social values and traditions, customs and practices, aesthetic and spiritual beliefs, artistic expression, language and other aspects of human activity. The significance of physical artifacts can be interpreted as an act against the backdrop of socioeconomic, political, ethnic, religious and philosophical values of a particular group of people. Naturally, intangible cultural heritage is more difficult to preserve than physical objects. Click here for more details

Aspects of the preservation and conservation of cultural intangibles include:

Suman Nath
A cotraveler who seats endlessly on a chair that we tend to call world and moves through wonder places. Try not to move from the chair, transcending time. Try to unearth silences and capture through multiple lenses. Behind the corner of my eyes there are things I can not see... things I do not understand... So here I am with words to share and become a cotraveler from my being. Yes, so many things to express but not genuinely gifted with skills.

My random thoughts
Photos I take